Greektown: A Profile of Toronto Neighborhoods Did you know that Toronto’s Greektown neighbourhood is home to the largest Greek community in North America?

In fact, it’s home to the largest Greek community in the entire world (besides Greece itself, of course).

But that’s not what makes it so special. Greektown is also known as The Danforth, due to its location on Danforth Avenue (Jason Baker, Flickr)

There’s a lot more to love about Greektown, whether it’s the diverse collection of restaurants serving everything from souvlaki to sushi, or the independent coffee shops and indie retailers.

Greektown also hosts some of Toronto’s biggest and most exciting events.

These festivals (such as the Taste of Danforth) draw over a million visitors, giving all Canadians a chance to celebrate the rich history, arts, culture and cuisine of Greece.

Here’s what else makes Greektown such a wonderful neighborhood…. 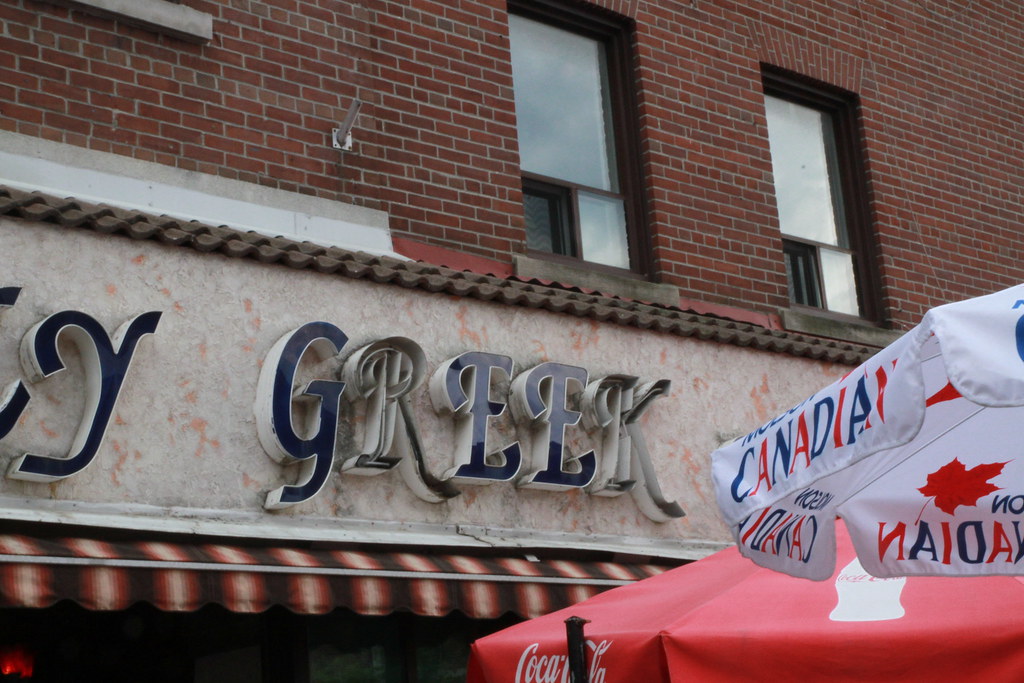 Greektown is known for a lot of things, but it’s especially known for its food (Joseph Morris, Flickr)

According to Culture Trip:

The Danforth pretty much equals foodie heaven. So many great restaurants to choose from that it’s hard to settle on just one.

For example, Messini on 445 Danforth Avenue is described as “Greektown’s gyro king.” 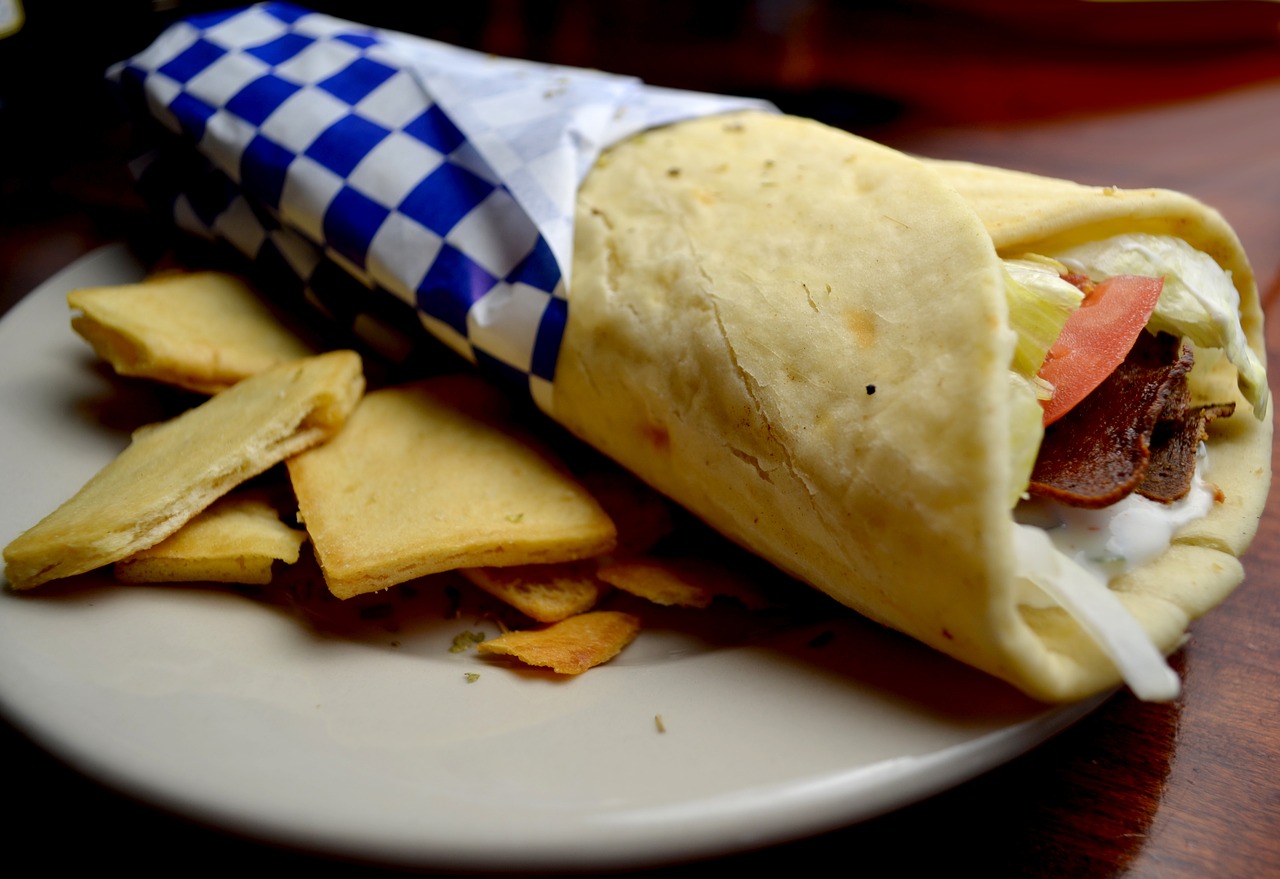 A community staple since 2002, Messini is famous for its giant pita wraps (Pixabay)

Whereas Mezes is formal and intimate, specializing in classic dishes such as souvlaki and saganaki, Christina’s is a great family restaurant with live music and dancing.

Want something sweeter? Check out Athens Pastries for the city’s best Greek sweets and desserts (Pixabay)

Despite its name, Greektown is also home to countless multicultural eateries.

Chinese, Japanese, Mexican, German, Lebanese, Greek, Italian, Spanish. The Danforth has it all. 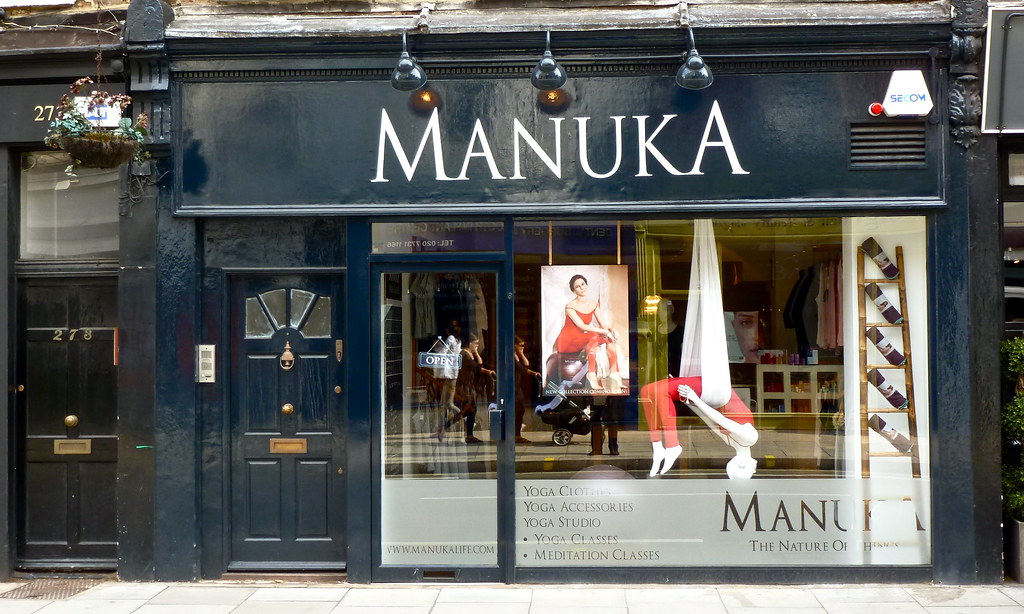 Once home to a cluster of small stores, today The Danforth boasts some of Toronto’s best retail.

NOW Magazine says “The Danforth is home to a roster of must-visit indie boutiques” and SeeTorontoNow calls it a “premier shopping destination.”

The neighbourhood has everything from specialty shops to mega-malls (Jeff Hitchcock, Flickr)

For example, Korry’s on 569 Danforth Avenue sells designer men’s clothes from brands like Hugo Boss and Canali, while Becker’s Bridal (387 Danforth) is the oldest bridal salon in Canada! 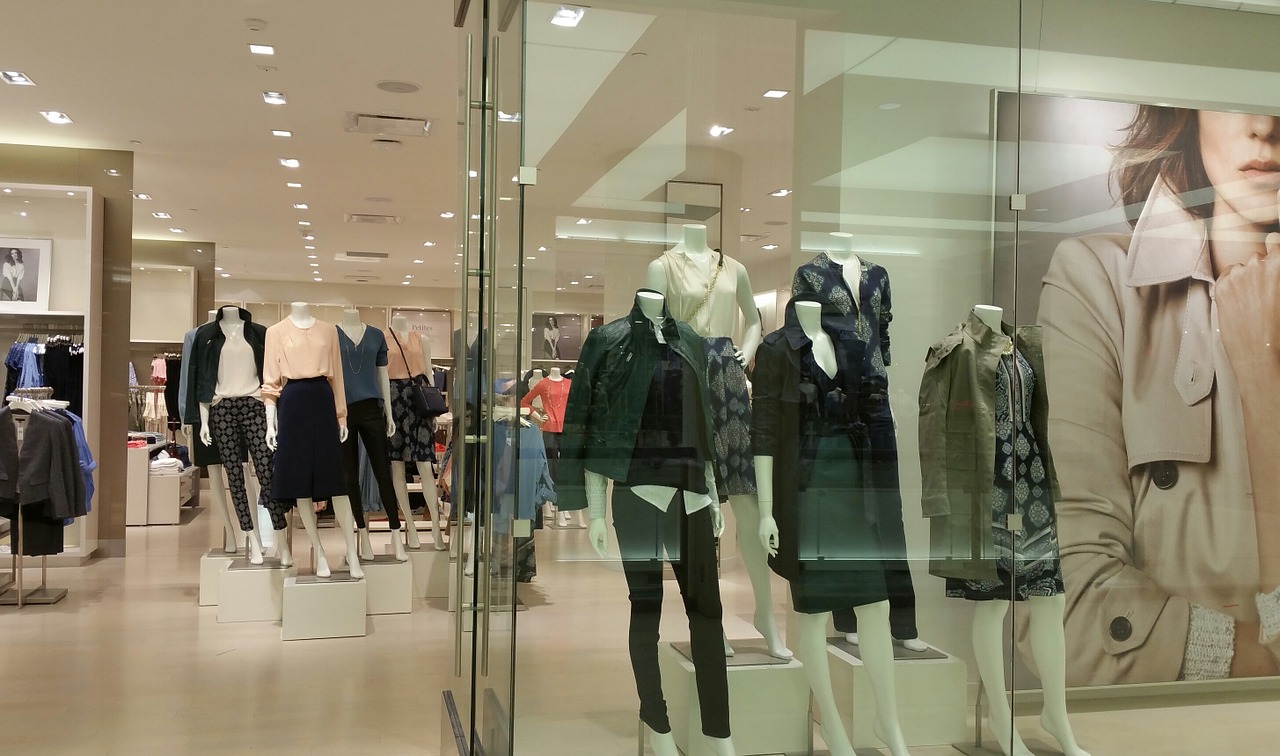 Looking for more of a one-stop-shopping destination? Greektown has that too.

Both The Riverdale Shopping Center and Gerrard Square are less than 7-minutes away. 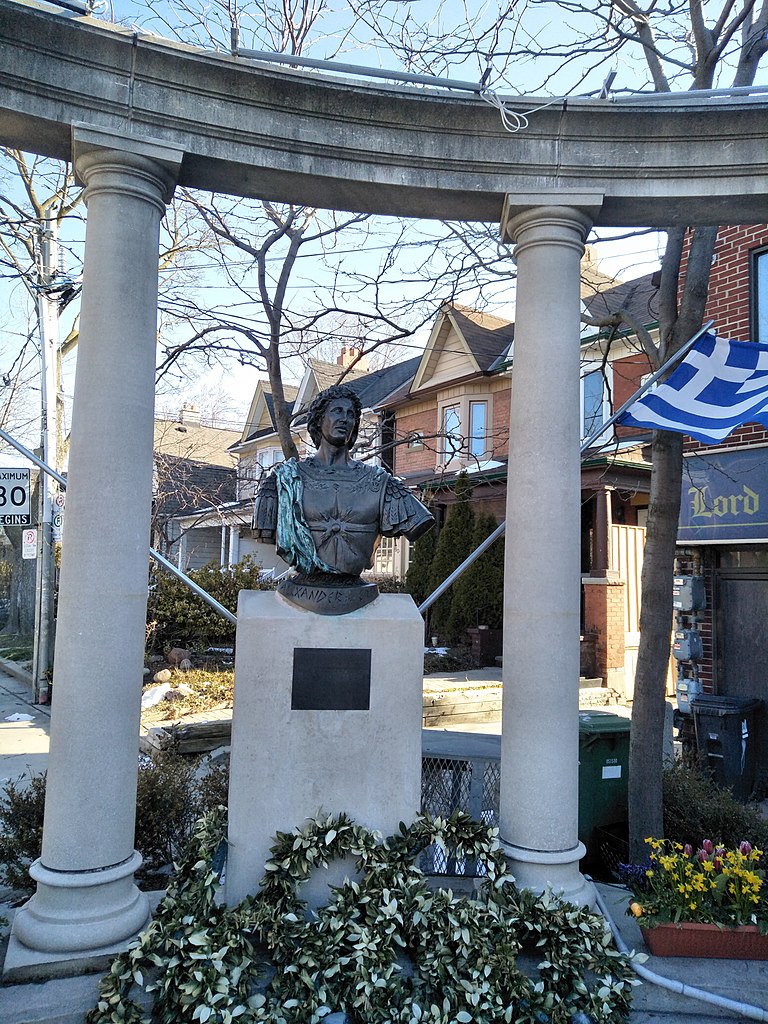 Just as ancient Greece is famed for its arts and culture, so is Greektown (Fitri Penyalai, Wikimedia)

The Toronto neighborhood is rich in history and heritage.

For instance, all street signs in The Danforth are in both English and Greek. 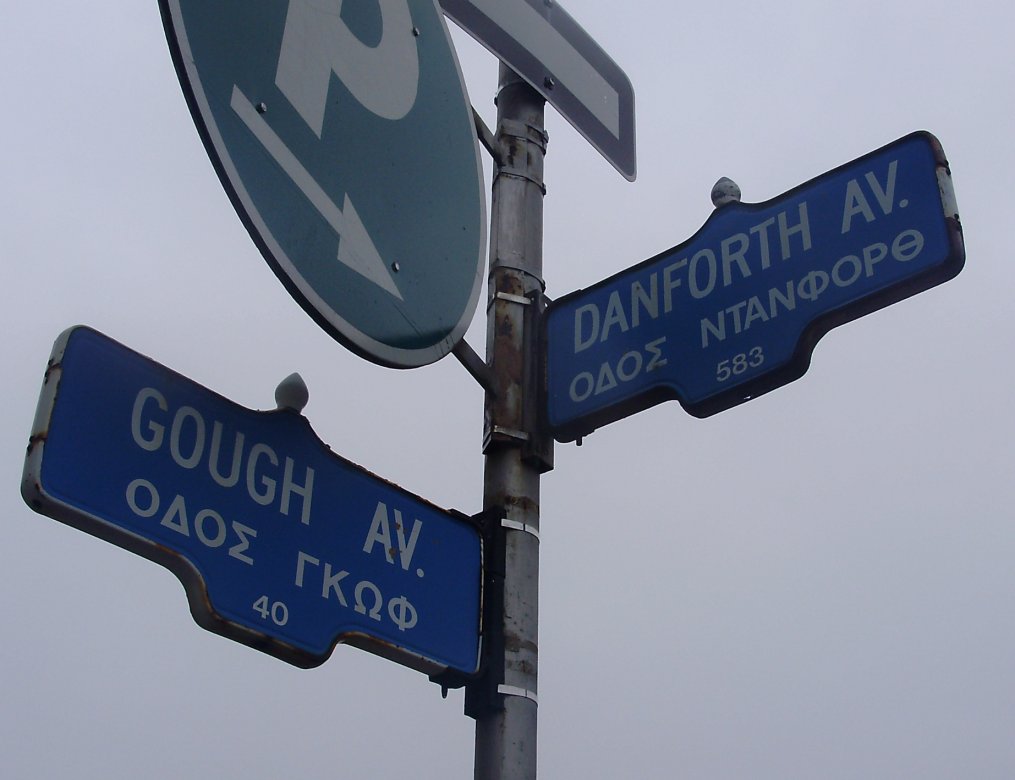 To quote Shakespeare, “It was Greek to me….” (GTD Aquitaine, Wikimedia)

But Greektown’s contribution to arts and culture goes way beyond simple street signs.

The neighborhood is also home to the Danforth Music Hall.

Opening in 1919, it’s hosted some of the biggest names in music, including Rihanna, Justin Bieber, Iggy Azalea and Lorde. 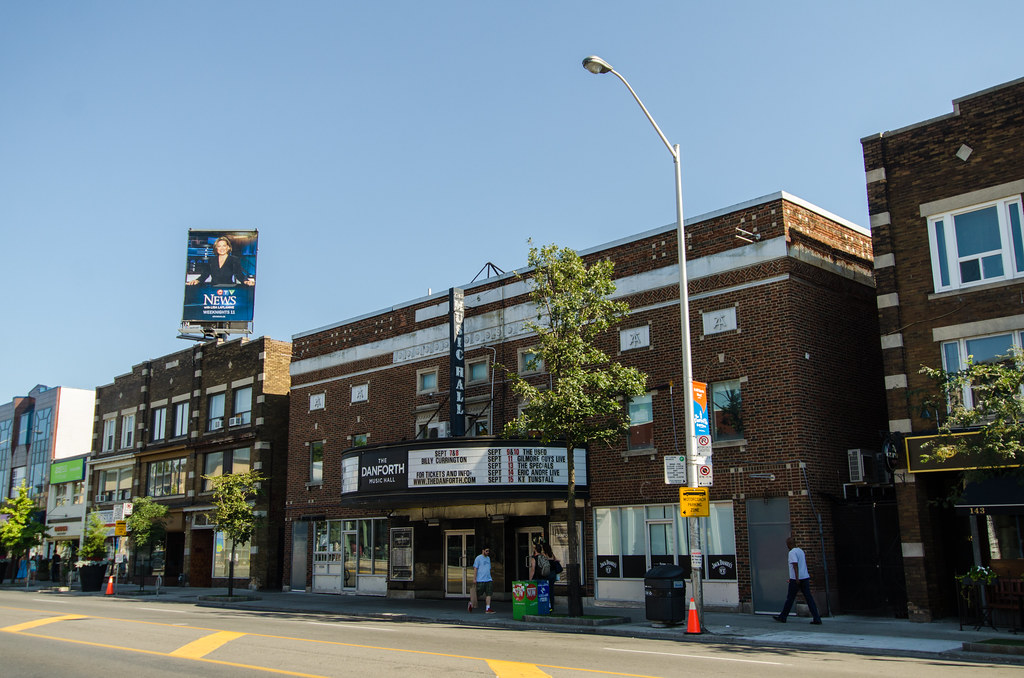 Besides music, the Danforth Music Hall has strong ties to the entertainment industry. For example, the venue has featured performances of RuPaul’s Drag Race and stand up by Dave Chappelle.

Hollywood has also come knocking several times, using the music hall for movies like Chicago and How to Lose A Guy in 10 Days. There’s always something to do in The Danforth (Joseph Morris, Flickr)

Of Greektown’s many events and festivals, none is bigger than the Taste of Danforth.

Although The Taste of Danforth celebrates Greek food and culture, it also features dishes from around the world. 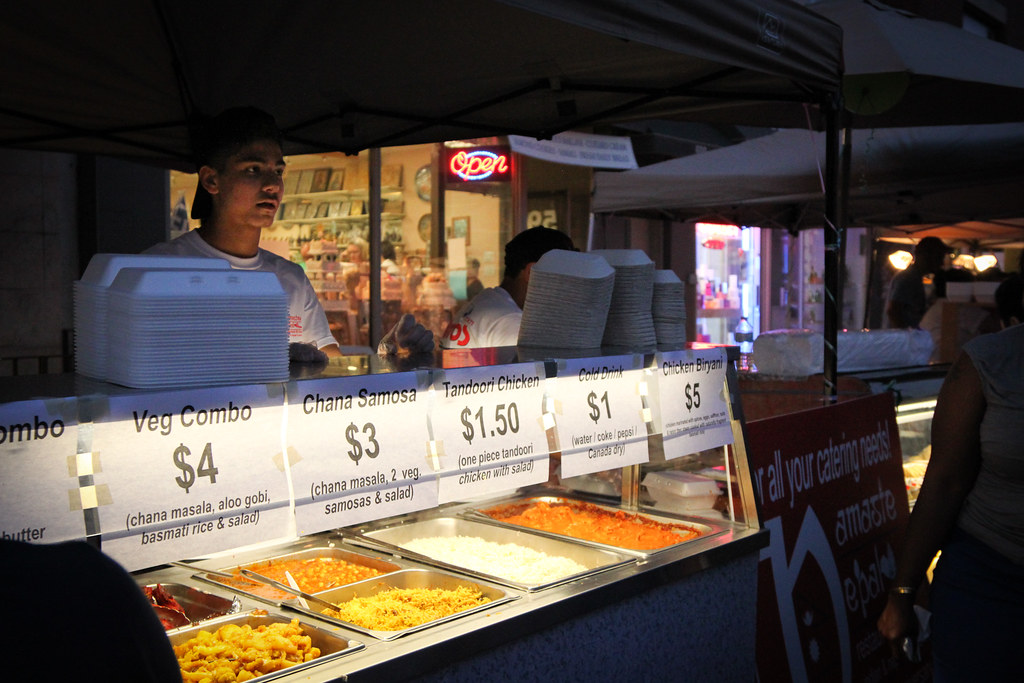 This year, the Taste of Danforth will run from August 9 to August 11, 2019 and feature the following activities: 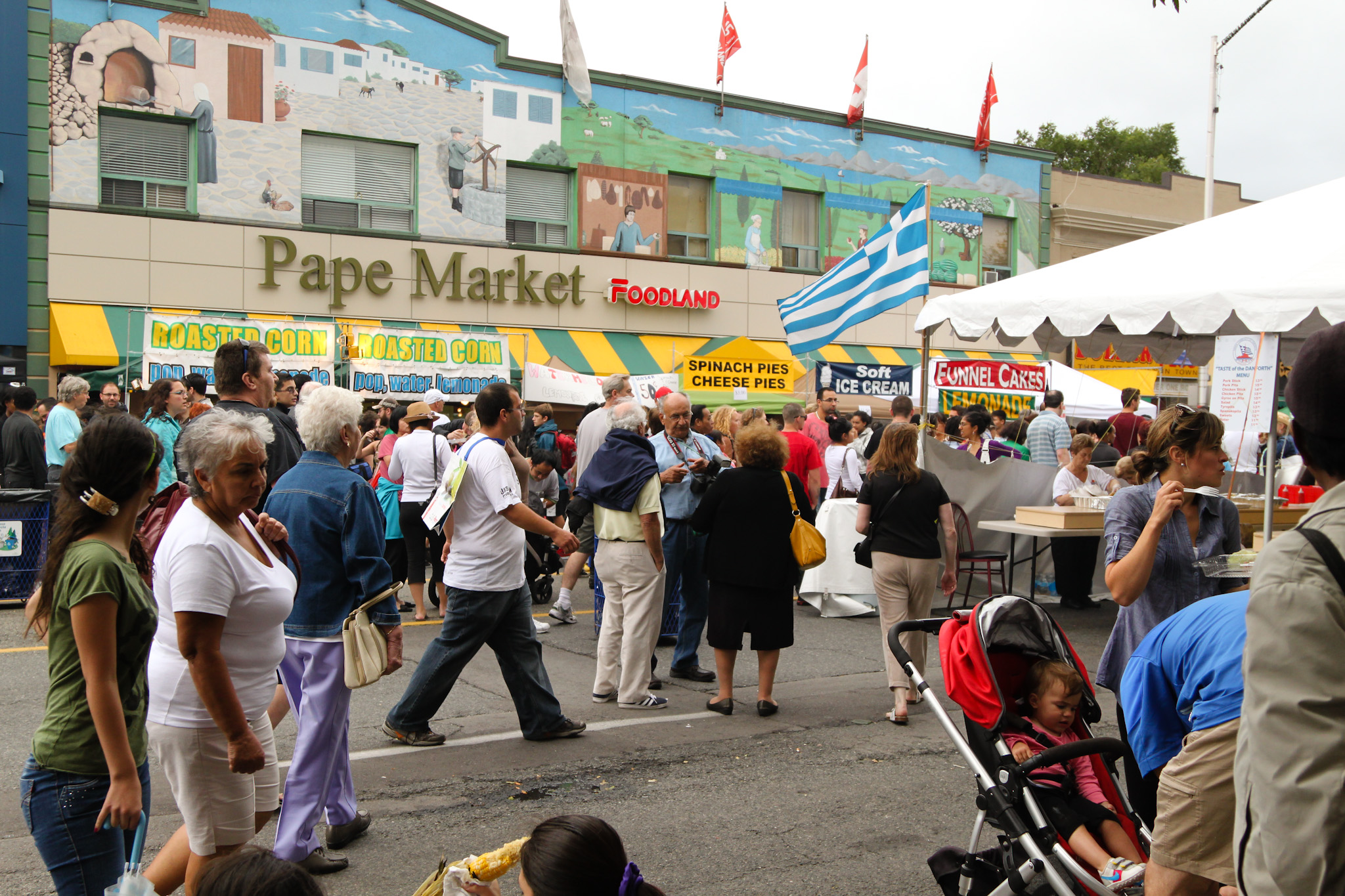 The Taste of Danforth truly is foodie heaven (syntheticstrings, Wikimedia)

Check out Music on the Danforth, a 4-day affair with food, shopping and bands all along Danforth Avenue. 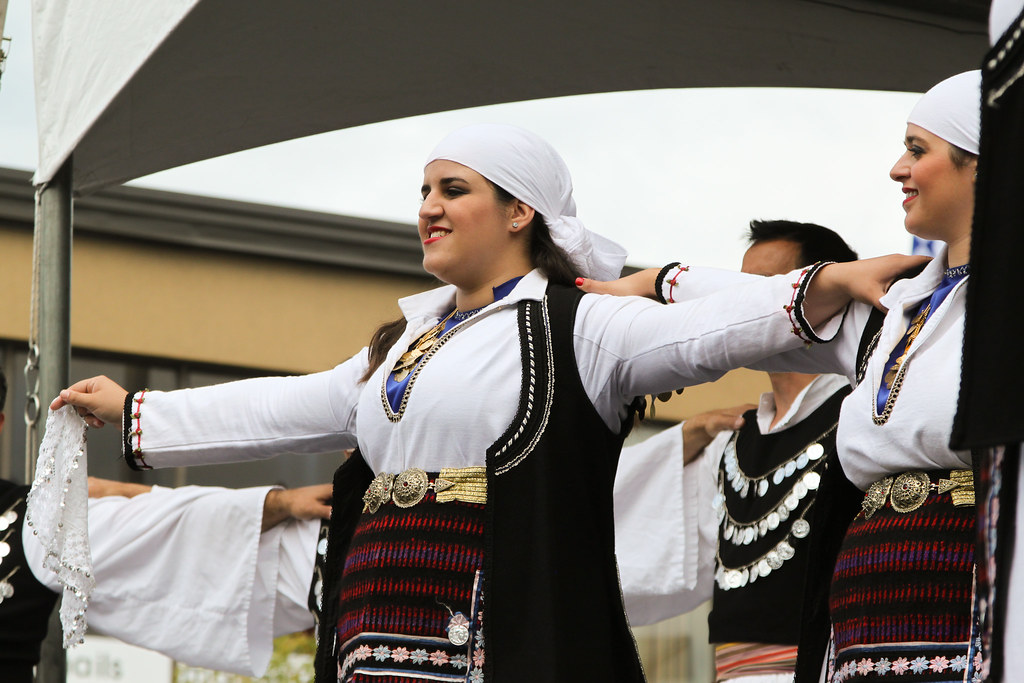 You’ll hear everything from jazz and pop to traditional Greek music (syntheticstrings, Flickr)

Finally, be sure to head over to Carrot Common on 384 Danforth Avenue. 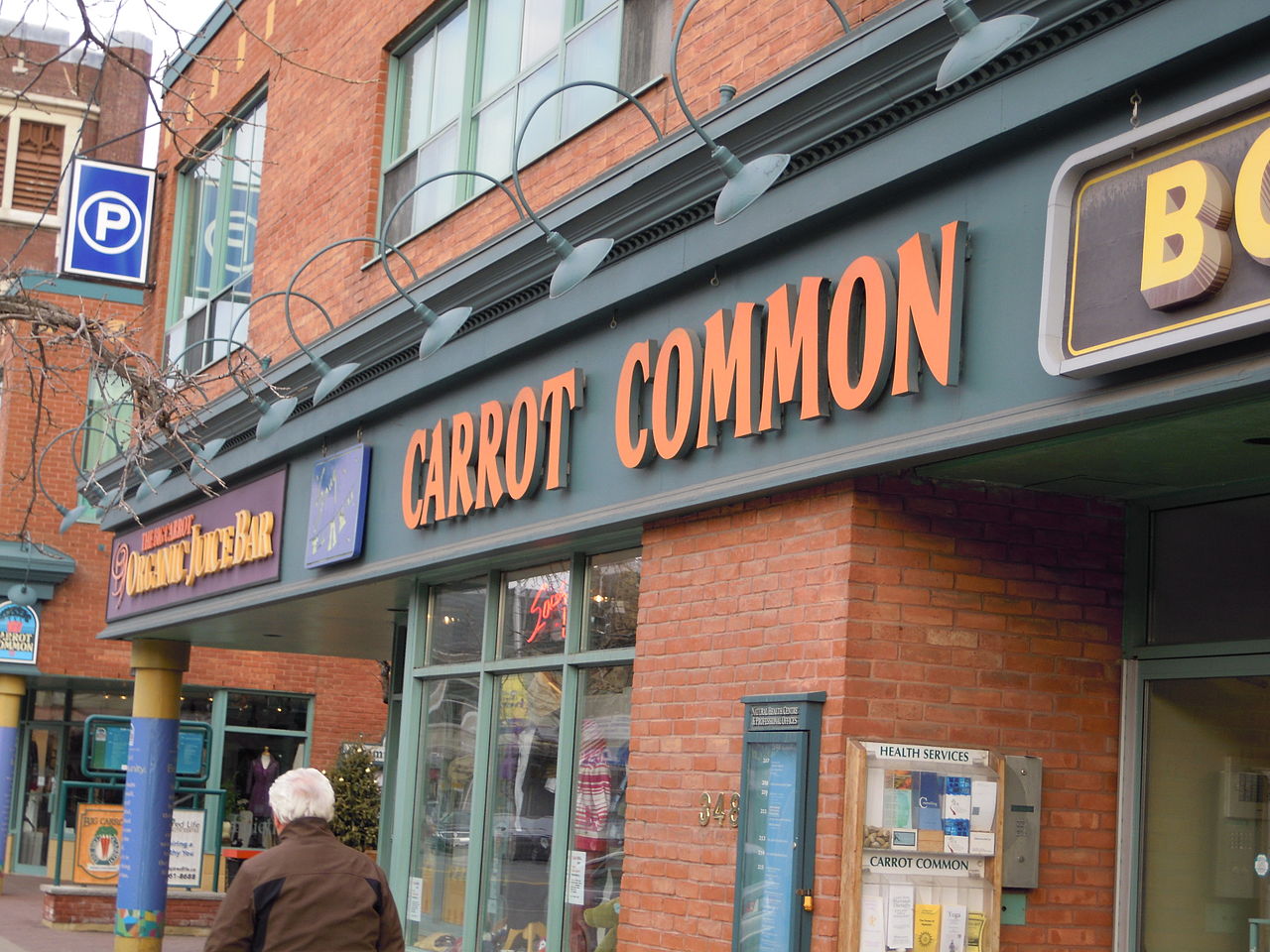 It also offers activities like educational workshops, community gardening, and art competitions, making it fun for the whole family. There’s so much to love about Greektown, from its food to its festivals to its food festivals.

Yes, there is Food, Food, and more Food – but Taste of the Danforth is so much more!

And the same can be said of all Greektown. The neighborhood is rich in arts, culture, entertainment, shopping, dining, community, diversity and history.

Whether you’re Greek or not doesn’t really matter, because Greektown is for everyone.

Want to learn more about Greektown Toronto? Contact me below with your details!